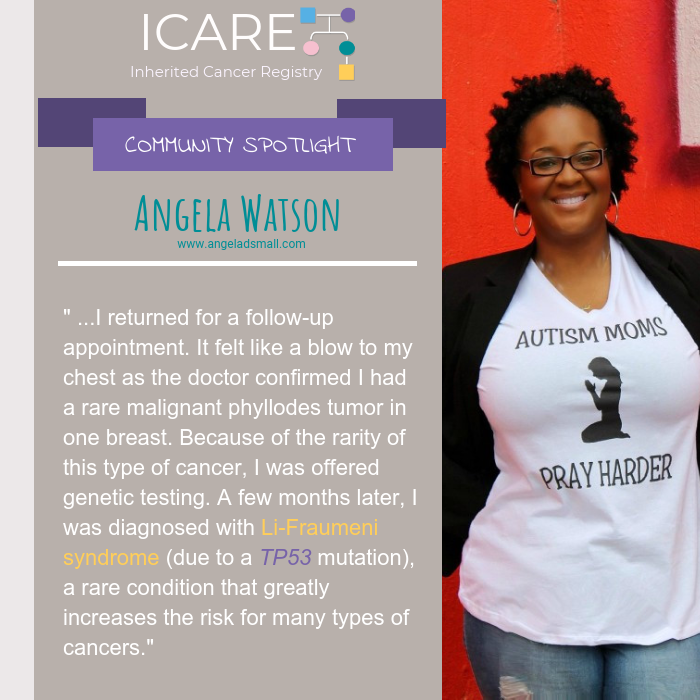 Life was great at 45. I had nothing more than a few headaches and was a tad overweight. After a friend was diagnosed with breast cancer, I realized I had not had a mammogram in a couple of years, so I scheduled an appointment. One mass was found, but it was benign and nothing to worry about. The mass continued to grow, and again, a biopsy confirmed it was benign. The mass was removed, and I went on with my life. A few months later, I returned for a follow-up appointment. It felt like a blow to my chest as the doctor confirmed I had a rare malignant phyllodes tumor in one breast. Because of the rarity of this type of cancer, I was offered genetic testing. A few months later, I was diagnosed with Li-Fraumeni syndrome (due to a TP53 mutation), a rare condition that greatly increases the risk for many types of cancers.

I have three children ages 11, 22, and 27. My 11-year-old was diagnosed with autism at age 3, which has prepared me to advocate like no other. Although there is so much more to my story, when faced with challenges, I prefer to come through and share the answers I have collected throughout my journey. I’m just starting, but here are a few tips I have used to cope:

Hope this helps because I’m out of space. Sending great vibes and love your way!

Permanent link to this article: https://inheritedcancer.net/spotlightnls2019/