Expansion of Criteria for BRCA1/2 Testing through the USPSTF

The U.S. Preventive Services Task Force (USPSTF) came out with new genetic testing guidelines for the BRCA1/2 genes, which has garnered substantial media attention. This task force consists of a team of primary care and preventive medicine healthcare experts to lower the chance of a conflict of interest  (which is also the reason that subspecialty providers who practice in the area of clinical cancer genetics were excluded from this group, but who may be consulted to provide input).  For the current guideline, essentially a three-step process was included: 1) a brief risk assessment for BRCA1/2 risk by primary care providers with a validated tool; 2) referral to genetic counseling if positive; and 3) BRCA1/2 testing if indicated.

A substantial update to the guideline is that it now covers more women at-risk for a BRCA1/2 mutation.  Specifically, guidelines now include women with a history of breast, ovarian, fallopian tube, and peritoneal cancer who are disease-free, as well as those with ancestry prone to BRCA1/2 mutations, such as Ashkenazi Jewish women.  Some of the items that were not addressed include: 1) other cancers associated with the BRCA1/2 genes, including male breast cancer, prostate cancer, or pancreatic cancer; 2) other inherited breast or ovarian cancer genes (this is especially relevant as  most providers are not just testing for the BRCA1/2 genes, but other genes as well through multi-gene panel tests); 3) existing disparities in testing across racial/ethnic groups, and how these new guidelines may affect existing disparities; and 4) lack of accounting for some of the subtle nuances of treating those with a BRCA1 or BRCA2 mutation by outlining the differences in type of breast cancer that each primarily predisposes someone to (i.e., triple negative breast cancer) and providing evidence to support hormone receptor blockers for prevention. 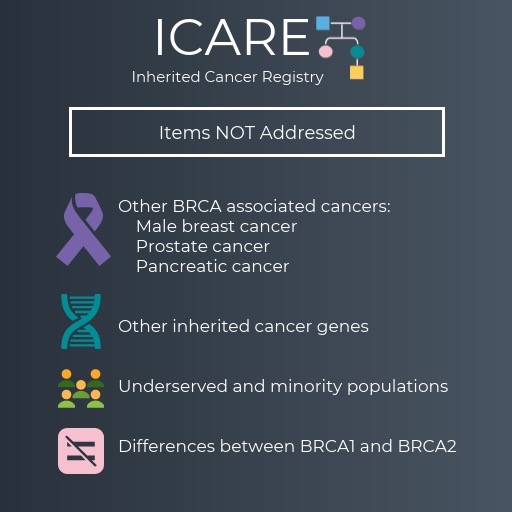 Permanent link to this article: https://inheritedcancer.net/5nls2019/