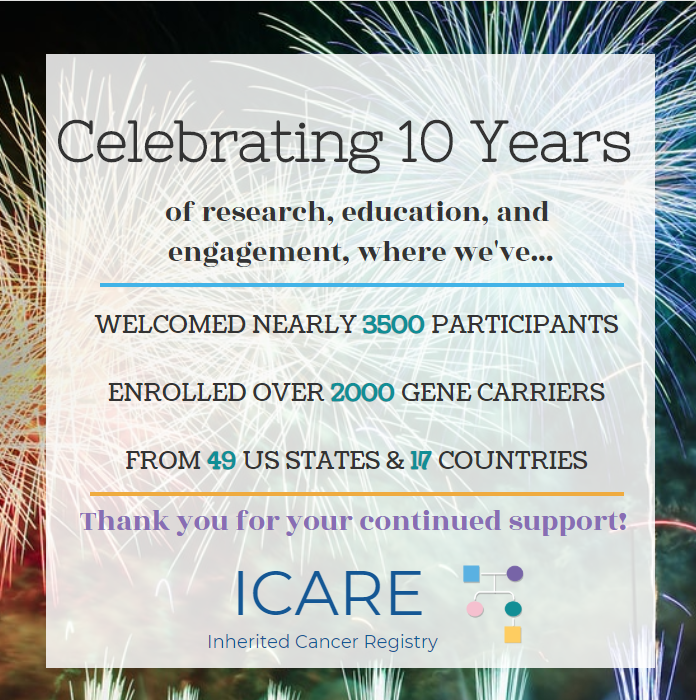 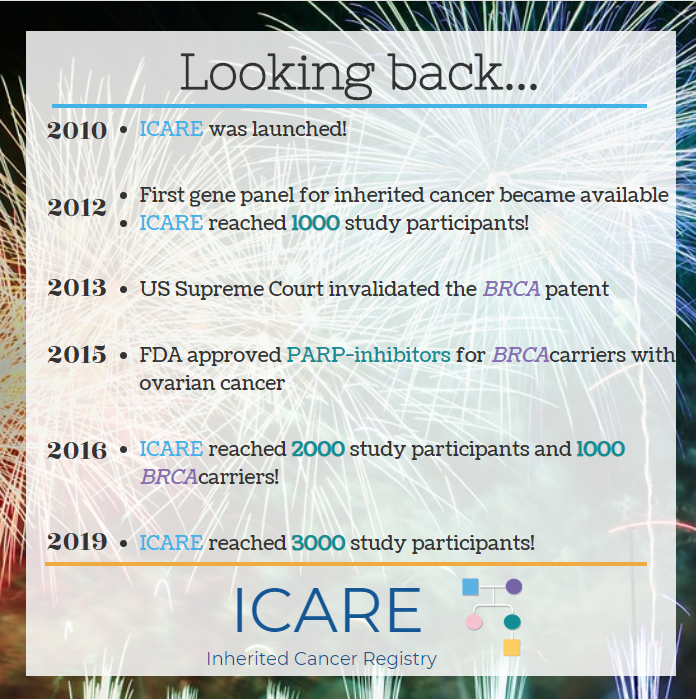 We are celebrating 10 years of research, education, and engagement, through which we have enrolled nearly 3500 participants, including over 2000 gene mutation carriers, disseminated 15 newsletters, led and collaborated on multiple research projects, and impacted individuals affected by inherited cancer predisposition all over the world.

Let’s take a quick look at what’s happened in the last decade:

2013 –The Supreme Court invalidated the BRCA patent which allowed expanded use of multi-gene panel testing as the BRCA genes could then be added to the panel tests.

2015 – FDA approved the use of PARP inhibitors for BRCA carriers with ovarian cancer which improved treatment options.

2017 – The FDA approved immunotherapy treatment for mismatch repair-deficient cancers, which was an important advance for individuals with Lynch syndrome.

2020 – Ongoing discovery of new cancer genes and improved technology continues to drive cost of genetic tests down to as low as $250 and lower!

Thank you for your continued support in helping us fulfill our mission to end the cycle of inherited cancer through research, education, and engagement! 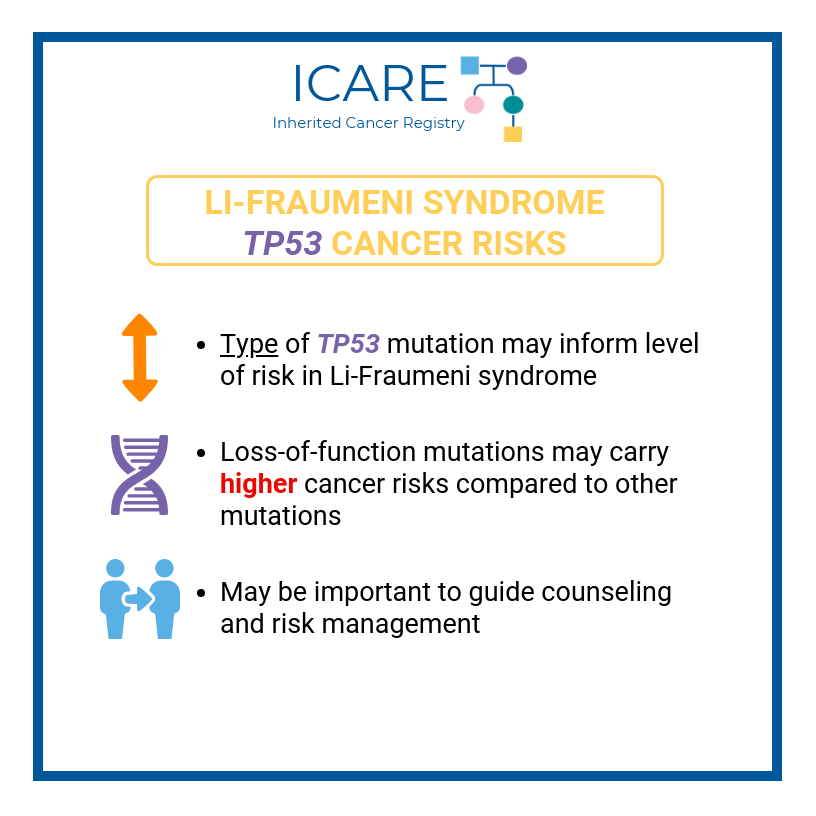 Since expanded genetic testing has become available through multigene panel tests, studies have suggested that many people identified to have TP53 mutations do not have a typical personal or family history, which is usually seen with Li-Fraumeni syndrome (LFS). A recent study looking at over 300 individuals with TP53 mutations (identified through multi-gene panel testing) suggested that the level of cancer risks was dependent on the type of mutations within the TP53 gene. Specifically, those with a loss-of-function mutation (i.e., causing the protein produced from the TP53 gene to lose its function) tended to have stronger, more classic family histories suggestive of LFS, compared to those with other types of mutations (i.e., dominant-negative missense, other missense, splice site, or in-frame deletion). Although these findings require confirmation through other studies, this type of information may eventually become very helpful for genetic counseling by refining cancer risks and guiding follow-up care among individuals with TP53 mutations.

Several research groups from around the world that have conducted cancer screening among patients with Li-Fraumeni syndrome and a germline TP53 mutation have recently reported on their observations. Specifically, the National Cancer Institute group demonstrated that screening inclusive of rapid total body MRI detected cancers at an early stage,1 similar to findings published through other recent smaller studies.2,3 Collectively, these findings demonstrated the extensive screening advised for many Li-Fraumeni patients is feasible; however, some of this screening may lead to false positives (i.e., a positive finding on a cancer screening test that ends up not being cancer) as well as cancer overdiagnosis.4  Through a recent effort to look at whole body MRI in Li-Fraumeni syndrome patients across several previously published studies, data suggested that this screening test may be clinically useful and an important part of cancer risk management. Additionally, we recently published an article focused on ICARE participants with a germline TP53 mutation, who were identified based on a multi-gene panel test.6 We found that many of these individuals did not have a family history that would identify them as having Li-Fraumeni syndrome, which suggests that cancer risk in some of these ‘non-characteristic’ families may not be as high as those with a classic family history of Li-Fraumeni syndrome. This brings up the question about what screening is most appropriate for them. Overall, these articles all highlight the need to generate more evidence to refine screening practices among individuals with Li-Fraumeni Syndrome.

Genetic testing for inherited cancer predisposition is typically performed by testing for one condition at a time. However, with the tremendous advances in genetic testing technologies over the last few years, the cost of testing has plummeted. To put this into perspective, the first human genome cost 2-3 billion dollars to sequence and took over 10 years to complete. Based on newer technologies, the current cost  of sequencing a human genome is less than $10,000 and takes 4-6 weeks to complete. As such, it has become realistic to test for multiple inherited cancer conditions at the same time through “cancer panels”. These panels consist of several genes for conditions at a cost that is comparable to genetic testing for one condition. Insurance reimbursement for testing has been encouraging. An example of when to consider this test is for an individual with breast cancer in whom there is a strong family history of cancer, but the BRCA1 and BRCA2 testing (comprehensive BRACAnalysis® and comprehensive rearrangement testing (BART)) did not identify a mutation to be present. For more information about this testing, contact your local genetics professional.